Desync is a surreal drama “about the things you can’t say out loud,” according to Navasca.

The film will deal with themes that include multigenerational dynamics between immigrant parents and their Canadian-raised children, overwork in Asian culture and repression of one’s feelings.

“We kind of wanted to explore why do we hold off so much of our own honest thoughts to people we should be completely open towards,” said Navasca.

The two main characters of Desync will be an immigrant mother (Celine) and her daughter (Ana). This is a dynamic Navasca said has yet to be represented more widely in the media, especially when it comes to BIPOC (Black, Indigenous, People of Colour) representation.

Along with writer Chen Sing Yap and producer Asa Kazerani, Navasca said she drew inspiration for the film from personal experiences in an immigrant household. 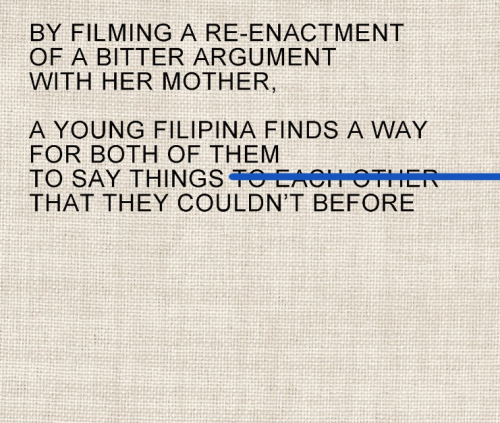 “The heart of our film,” according to Desync’s Instagram page. Photo provided by Minerva Navasca.

“I’ve always been a firm believer in write what you know,” she said. “Growing up I never felt comfortable speaking about my own experiences and anything personal – I didn’t grow up with that vocabulary being a high priority.”

Regarding the immigrant experience, Navasca said miscommunication often stems from valuing hard work in her culture, and this can lead to repressing one’s feelings “to get the work done.”

“When repressing your feelings becomes a lifestyle, you become disconnected from the vocabulary to ask for affection or ask for help, or to simply express that you are not well,” she added.

Despite the challenge, Navasca hopes to continue this type of vulnerability in her filmmaking to push forward a “greater conversation” through the stories she wants to develop.

While arguments and miscommunication are present in Desync, Navasca does not want the film to place blame at either generation, but rather look more closely at the root causes of these disagreements.

“These problems of miscommunication and disconnection aren’t the fault of ours and the fault of our parents” she said. “We want to showcase empathy and love no matter how complicated it is for our mothers.”

This includes moments of realization that the pressures of the older generation come from a place of concern.

“One thing my mom always says to me is ‘we just to ensure that you do better than us in life,”’ said Navasca. “That’s the whole immigrant dream right? And there have been conversations that [she says] ‘we have pushed you so much because we want you to have a good future, that you don’t have to worry about your wellbeing or your survival because we’ve been there and we don’t want that harshness and that struggle for you.”

Desync is expected to be released in 2023. Filming is set to begin on Dec.8.

More info about the film’s development can be found on its Instagram page.

It is set to be featured as part of the Regent Park Film Festival this year.

Navasca previously spoke with CJRU about her film, Kamayan, during its run at the 2021 Regent Park Film Festival.