Toronto’s city clerk certified the election results on Oct. 27, confirming the winners of the Toronto municipal election held on Oct.24. In what was the closest race to watch, former environmental commissioner of Ontario Dianne Saxe narrowly won Ward 11 University-Rosedale by 130 votes.

Earlier during election night, Norm Di Pasquale, who also held a small lead, was named the winner initially by some media outlets – but the lead gradually slipped as the night progressed.

As the Ward 11 elect, Saxe and the other seven new city councillors will be officially sworn in on Nov. 15.

“We are in the middle of a housing emergency,” Layton said in an online meeting earlier this year. “Inclusionary zoning has been discussed as a significant potential to help alleviate some of the strains on our housing crisis – it’s not a silver bullet by any means. Governments will still need to bring affordability to those that need it.”

One of Layton’s last efforts to help remedy the housing crisis was spearheading legislation that allocates 10 per cent of new developments as affordable housing, which would increase to 22 per cent by 2030.

This was in response to Toronto’s continued rise in rent, the threat of renovictions and months after tent encampment clearings were met with deep criticism from the public. 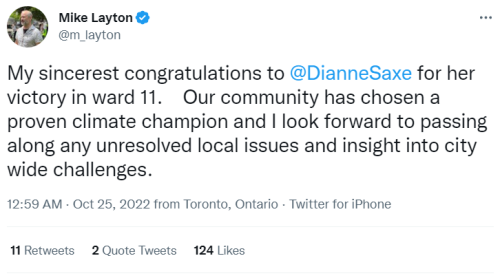 The passing of inclusionary zoning was viewed as not going far enough by critics, however – especially by ACORN Canada – an independent national organization of low and moderate income people – they proposed starting at 22 per cent and seeing further increases from that benchmark.

Saxe campaigned for inclusionary zoning as well and focused on diversifying the type of homes that should be built and available.

This includes introducing more stacked, multiplex and laneway housing and fair rent controls to ensure tenants are protected from unforeseen rent increases and renovictions, according to her website.

In a September interview, Saxe told CJRU her plans for affordable housing also include making the missing middle a right, which are plans to create more diverse housing in walkable neighbourhoods.

Further, Saxe said the city needs to think about how land is being used in the downtown core, and shifting its priorities that puts pedestrians and cyclists above private cars.

According to the city of Toronto, more than half of downtown residents are renters.

The city’s main initiative to boost affordable housing is the HousingTO for 2020 to 2030 – which includes building the supply of mixed income units.

Listen to CJRU’s coverage of Ward 11: