The Toronto Reel Asian International Film Festival returns for its 26th iteration in 2022.

Due to the COVID-19 pandemic, the festival was online almost exclusively for 2020 and 2021.

This year marks the full return to in-person screenings for Reel Asian, while the hybrid approach remains in place to provide audiences with options for their moviegoing experiences.

Artistic director Aram Collier, who has worked with Reel Asian on 11 festivals and in some capacity since 2005, said planning for this year felt different, and there was “a bit of a lapse” remembering how things were done pre-COVID.

“In that respect, you’re actually planning two festivals, so we’re kind of organzing the online portion as well as the in-person,” said Collier.”It’s different, it feels new.”

Collier said the in-person experiences have been positive. He cites the overwhelming support for the opening night screening of Riceboy Sleeps, the Korean-Canadian feature from director Anthony Shim.

“We talk about to a point of it being like it’s [in-person films] a cliche, but it is meaningful to gather together, to be with others especially when you are experiencing things that resonate with the [Asian] community.”

For the curation process, Collier said there was not a specific theme the Reel Asian team looked for and “let it reveal itself through the submissions.”

This year, Collier highlights the documentary selections that cover long periods of time and their “ability to showcase movements, ideas and characters that change over time.”

Examples in the festival lineup include Beyond Extinction: Sinixt Resurgence by Ali Kazimi and An Act of Worship by Nausheen Dadabhoy.

Among the submissions this year are 10 Asian-Canadian films, a record high for the festival.

Along with Riceboy Sleeps, other Asian-Canadian films include Kathleen Jayme’s The Grizzlie Truth about the downfall of the Vancouver Grizzlies and the Toronto-based project Stay the Night by director Renuka Jeyapalan. 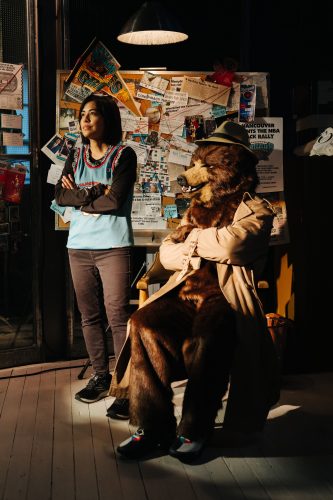 Kat Jayme’s The Grizzlie Truth documents the fall of the Vancouver NBA team in the 2000s. Photo courtesy of Reel Asian.

Collier said representation continues to be at the core of Reel Asian, however he said the submissions him and the organization look out for are the ones that go beyond the status quo.

“Representation is important, being seen,” said Collier. “I think it’s important to push the dialogue a little beyond that. It’s not just about seeing face, the look or the apperance of somebody. It’s about what that creator is trying to do with that story, how are they pushing the form, narrative, the dialogue forward whether its first generation, third generation, other forms of identity.”

Looking back on the past 17 years he has been with Reel Asian, Collier said it has been meaningful to see the community’s continued growth and enthusiasm, especially after COVID-19 disrupted the normalcy of planning and how the films were being watched.

“To see the community, to see it sustaining, to see that momentum build…I think that’s what Reel Asian has always been about whether when we were very small in 2005 or a little bigger like we are now,” said Collier. “Community experience is the most important thing.”

The festival is running until Nov.20th, and closes with a screening of Romeo Candido’s Topline at the Isabel Bader Theatre.

Most features and shorts are available online until the 20th.

The festival’s full programme can be found here.