The City of Toronto is announcing its full support the Danforth BIA and its planned initiatives for the rest of the summer, according to a recent press release.

The plan is to help fund and promote the BIA’s localized events centred around food, music and community engagement.

“I encourage Toronto residents and visitors alike to visit the Danforth and participate in all of the local events that are taking place this summer and fall, from Sounds of GreekTown to CaféTO to DB Beats,” Toronto Mayor John Tory. “The Danforth is known for its lively music, delicious food and its vibrant community which can all be enjoyed this summer.”

Under the Main Street Recovery and Rebuild Initiative (MRRI) and FedDev Ontario, the City provided a grant to the GreekTown on the Danforth BIAs of $25,000 to host “Sounds of GreekTown.”

All parkette performances begin at 7pm Thursday to Saturday, and 3pm on Sundays.

The musical aspects will be in concert with Toronto’s ongoing CafeTO project.

Now in its third year, CafeTO allows restaurants to be open later and have their own patios that extend into the city streets. 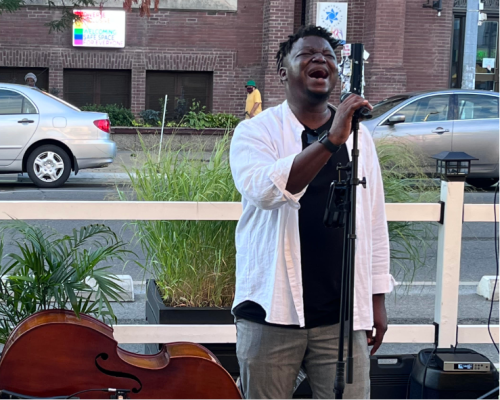 Dipo is one of the earlier musicians that is currently performing on the Danforth. He thanked the Danforth BIA for inviting him during his performance. Photo by Daniel Centeno/CJRU.

Continued support will also help the community’s small businesses, according to the press release. Through the main street recovery and rebuild initiative, about 18 million has been dedicated to helping the area’s business owners this year.

Local Artists like Dipo, were present at the early portions of the Sounds of Greektown.

The current commitment to helping Greektown and the Danforth BIA comes as the Taste of the Danforth festival was cancelled for a third consecutive year.

The festival is considered Toronto’s largest annual festival and one of the biggest in Canada. It usually draws more than one million people for the weekend, according to its website.

While 2020 and 2021 were cancelled due to the COVID-19 pandemic, this year’s cancellation came as the Greektown BIA could not adjust to the changes in the area – this includes the installation of the CafeTO patios and protected bike lanes on the road.

BIA executive director Mary Fragedakis initially hoped the festival could adjust in time, and proposed dismantling the patios and bike lanes for a weekend, but city staff said it could not happen.

In an online statement in June, the BIA said its focus will shift to more local events to continue highlighting the neighbourhood and its businesses for the summer.

CJRU contacted Mary Fragedakis for comment about the upcoming localized events and other initiatives the BIA has planned in the fall months.

CJRU is awaiting a reply.