With a 130 vote lead, former Environmental Commissioner of Ontario Dianne Saxe is the new city councillor for Ward 11 University-Rosedale, according to recent poll numbers.

Saxe held onto the small lead over Norm Di Pasquale when all 77 polls were counted past midnight on Oct.25.

Earlier in the election night, Di Pasquale was announced as the winner by some media outlets after polls closed at 8 PM on Oct.24.

However, Saxe slowly gained the lead over Di Pasquale as more polling stations released its numbers around 9:30 PM.

She held onto the slight lead when the last seven polls tallied the final votes.

Saxe, her team and supporters gathered for a party at Victory Cafe in the Annex on Bloor St. W to watch the results live on TV.

With the race tightly contested until 11 PM, Saxe thanked her team and volunteers for their help in the campaign. She also thanked the other candidates in the ward for the race. 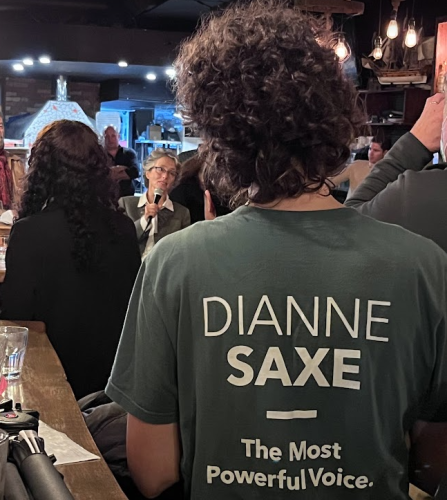 Without a result officially announced, Saxe thanked her team and volunteers for their help in the campaign. Photo by Daniel Centeno/CJRU.

Saxe and her family decided to leave Victory Cafe early before final results were announced.

Before she was announced the winner, CJRU had an opportunity to speak with Saxe about the campaign and what would be her top priorities if elected to council.

“I am feeling very good tonight,” said Saxe. “I’m really proud of the campaign that we ran, I’m proud of my team, I’m grateful to my family and to the people of University Rosedale. What ever happens, it has been an adventure and I’m proud about how we did it.”

Saxe said her first priorities would include addressing the need for climate action in the city, affordable housing and safer streets for pedestrians and cyclists.

Given the small lead, there is speculation at the watch party that there may be a vote recount. No announcement has been made as of yet.

If the results hold, Saxe will be sworn in the new Ward 11 city councillor on Nov. 15.

Since 2018, University-Rosedale’s city councillor has been Mike Layton, son of the late Jack Layton.

Prior to the realignment of the Toronto wards, Layton was councillor for the former Ward 19 Trinity-Spadina.

Layton publicly endorsed Di Pasquale during the election. In an interview with CJRU after launching his campaign, Di Pasquale said Layton encouraged him to run for Ward 11.

Before entering the Ward 11 race, Saxe was the Green Party of Ontario candidate in University-Rosedale in June 2022.

With a background as an environmental lawyer, she worked in provincial politics until the office of the environmental commissioner was removed by Premier Doug Ford in 2019.

After launching her campaign in September, Saxe spoke with CJRU about her platform and what voice she hopes to bring to city hall.