The City of Toronto released the plan on Nov. 7 through a media press release.

A live video was initially scheduled by the city regarding the updates, but it was made private and unavailable to the public.

The plan expects to introduce changes to try and help more than 8,000 of the city’s unhoused population.

The plan states that the city’s street to homes program will introduce more 24/7 outreach teams for wellness checks to encourage those living outdoors to seek shelter.

Further, 60 warming centres will operate during extreme weather conditions, which is down by four last year.

However, the city will continue to scale back on the number of temporary shelters, which includes the decommissioning of the Novotel at the 45 Esplanade by the end of 2022.

Plans to decommission all temporary shelters are supposed to be completed by the spring of 2023.

Also, space between beds will be reduced from two metres to 1.25 metres to accommodate the extra beds for shelters.

This fall, advocate groups, like the Shelter and Housing Justice Network, report that dozens of individuals are turned away from shelter each night – they say that there should be 2700 spaces to start instead of the 1000 the city proposes.

The spike in COVID-19 cases is also causing worry. There may be a reluctance for individuals to be in shelters that now have reduced spacing between beds in the winter months, according to the network.

In response to the city’s winter plan, housing advocates and supporters went to City Hall this week to offer letters to Toronto Mayor John Tory and the city’s Board of Health. 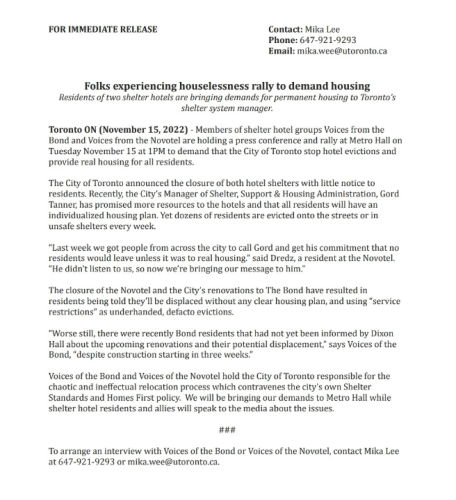 The Voices of Novotel, a group dedicated to helping those evicted by the shelter hotel, sent its press release to CJRU this week. Photo courtesy of the Voices of the Novotel Twitter account.

Advocates asked for a meeting Tory, but their request was denied.

Despite the limit on the number of individuals allowed into city hall, advocates and supports gathered at the Homeless Memorial outside the Church of the Holy Trinity. There were 12 names added to the memorial.

Another rally is planned for next week to support the evicted residents of the Novotel at 45 Esplanade and at the temporary shelter on Bond St. The Novotel’s decommissioning is expected to be completed by the end of the year, but residents were evicted starting on Oct. 12, when the city announced plans for its closure.

The rally will be held at David Crombie Park on Nov.15.

The press release states that advocates continue to call Gord Tanner to reconsider decommissioning the shelters, and that more spaces and health considerations are required to house individuals before the winter months.

Tanner is the general manager of the city’s shelter, support and housing administration division.

Listen to CJRU’s coverage of the response to Toronto’s winter plan: