What is known as the public safety investments for the 2023 budget, Tory and Chair of the Budget Committee Gary Crawford outlined what the increased funding will go towards.

Goals of funding include the expansion of the Neighbourhood Community Officer program and ensuring 200 new officers in the police force.

i) 162 of these officers will be part of the response units, with 25 focused in the downtown core. 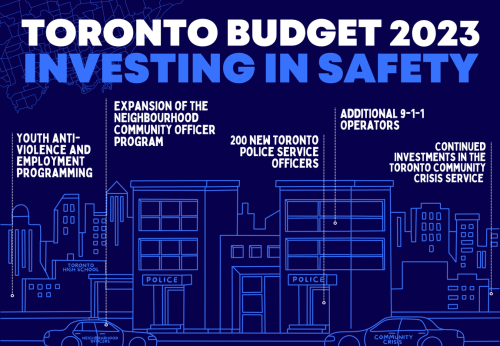 ii) 22 will be in major case management and 16 will be included in the neighbourhood expansion plan – this will cover 52 neighbourhoods according to Tory.

Further, part of the funding will go towards the Toronto Community Crisis service. The service allows teams without a police presence to help individuals dealing with mental health crises.

Toronto Police released its own news release detailing the budget increase request and the department’s focus on public engagement and community feedback in the decisions.

“For the last decade the Service has implemented cost containment measures including reallocating existing resources when areas of priority were identified by the Service and the community,” writes Acting Chief Administrative Officer Svina Dhaliwal. “This budget proposal aims to improve emergency response times as part of a multi-year modernization plan to effectively address the city’s increasing demand for police services”.

The proposed budget increase is being heavily criticized by police defunding advocates.

No Pride in Policing Coalition writes in its media release that Tory has failed for nine years to convince residents that the Police will protect them.

Further, the coalition writes that the mayor is refusing to mention the names of individuals killed by police, which includes Taresh Bobby Ramroop.

Professor Beverly Bains of the Coalition continues to be critical of the city’s police and their recent decisions.

Bains was heavily critical of Toronto Police this past summer when data showed that Black, Indigenous and Peoples of Colour are disproportionately affected by use of violent force or strip searches by police.

Former police chief James Ramer wanted to offer an apology, and Bains, who was present at the press conference, said the apology was not accepted and that it was more of “a publicity stunt” than an actual promise to change police violence against BIPOC individuals.

CJRU reached out to Professor Bains and the Toronto Police for comment, and are awaiting a response.