Toronto city councillors continue to question why more services for the unhoused are omitted from the upcoming city budget for 2023.

Ward 9 Davenport councillor Alejandra Bravo said the increasing number of unhoused individuals is the crisis of day and said it impacts several priority areas of the city.

“What I hear from my constituents, what we see in the public realm, is the explosion and numbers of people who are homeless and becoming homeless in every ward, in every aspect, present in every public space – it is the crisis of the moment,” Bravo said. “On Tuesday and in the documents, I don’t see this as a headline as the emergency we need to meet.”

During the deputations, Dr. Carolyn Snider said medical services continue to be underfunded to provide care for the unhoused. Dr. Snider is Chief of Emergency Medicine for Unity Health Toronto at St. Michael’s Hospital.

She said the healthcare sectors continue to be in crisis, and the crises of COVID have yet to dissipate. 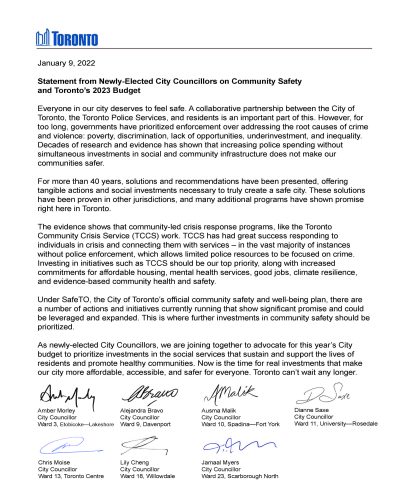 “I feel like day in and day out, we are managing crisis-related homelessness, and that was not the case 10 years ago,” she said. “We have always been under-resourced in shelter and housing, but this last year, and frankly since the start of COVID, has been something I have never experienced.”

The city’s services for the unhoused continues to be criticized for periodically closing warming centres during extreme cold weather and the decommissioning of shelter hotels while congregate shelters are at full capacity nightly.

During the holidays, warming centres operated for six days, and were not open again until the middle of an extreme cold weather alert at 7P.M on Jan. 13.

The eight new councillors, including Bravo and Toronto Centre councillor Chris Moise, signed a letter asking the city to prioritize its budget to social services.

This includes the Community Crisis Response Program, and other areas that can make Toronto more accessible, affordable and safer, the letter reads.

The budget meetings continue and will see its final report published in the coming days.

Other changes already announced include a 5.5 per cent property tax increase and a 37 per cent bump for Toronto Mayor John Tory’s office.

CJRU have contacted councillors Bravo and Moise for a comment on the upcoming city budget. No response was given at this time.